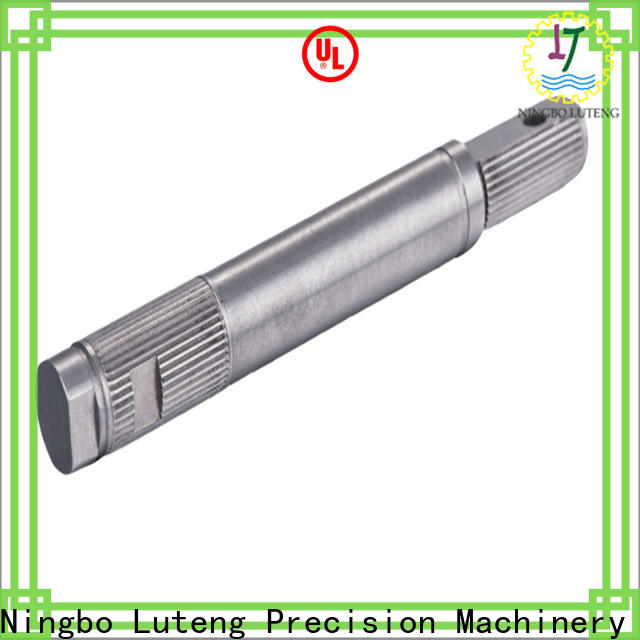 Shipping:
By Sea, By Air, By Train & By Express

Product Message
Hot products
Input Shaft Of Car
Threaded Long Spline Shaft
Shaft of Electronics Components
Knurling Shaft
Lower Shaft
Gearbox Output Shaft
Latest Product
Luteng CNC Parts turning parts factory price for machine
Luteng CNC Parts certificated cnc turned parts wholesale for commercial
Luteng CNC Parts sturdy cnc auto parts series for vehicle
certificated custom auto parts customized for commercial
Relevant Articles
Fight Against Typhoon In-fa
Typhoon In-fa slammed into China's east coast province of Zhejiang on Sunday, causing mass evacuations in Shanghai districts.Communities have been drenched in knee-deep water and 10,000 trees have been uprooted, although there are no immediate reports of any major damage.About 330,000 residents of the Fengxian District on Shanghai's southern side were evacuated which was packing wind speeds of up to 100 kilometers per hour (60 miles an hour) and gusts of up to 155 kph (95mph).
Read More>>
Ningbo Luteng Will have a official website in alibaba.com
COVID-19 is badly affected business, customers could not come China and we could not go out for Exhibition. In consideration of it, Managers is planned to set a new official website in Alibaba.com and we will deeply marketing in social media.
Read More>>
Washing Machine Clutch
Washing machines come equipped with a transmission to help the motor transfer rotating power to the tub and the agitator--the center, cone-shaped shaft inside the basket. The transmission, in turn, uses a clutch assembly to engage the tub during the spinning cycle and, depending on the washer configuration, the agitator, during the washing cycle. In addition, the clutch prevents the motor from rotating the tub at full speed at the beginning of the spinning cycle to prevent component damage.As a washing machine shaft manufacturer,Luteng has cooperated with many washing machine manufacturer,like haier.
Read More>>
Hot Extrusion & Forging
What is Hot ForgingHot forging entails the heating of a workpiece to about 75% of its melting temperature. This allows for the flow stress and energy required to form the metal to lower, effectively increasing the rate of production (or strain rate). Hot forging aids in making the metal easier to shape as well as less likely to fracture.Iron, along with its alloys, are almost always hot forged for two main reasons:If work hardening progresses, hard materials (such as steel and iron) will become more difficult to work with, andIt is a more economical option to hot forge metals such as steel and then follow with heat treatment processes as metals such as steel can be strengthened through other processes (and not necessarily just cold working processes). While other materials need to be strengthened through the forging process itself, materials such as most of the titanium and aluminum alloys, can be hot forged and then then hardened.Average temperatures for hot forging includes:Aluminum (Al) Alloys - 360° (680°F) to 520°C (968°F)Copper (Cu) Alloys - 700°C (1 292°F) - 800°C (1 472°F)Steel – up to 1 150°C (2 102°F) During hot forging processes, the temperature reaches above the recrystallization point of the metal being formed. Being a process in which metals are plastically deformed above their recrystallization temperature, these high temperatures are required in order avoid strain hardening during deformation.This process usually involves heating the metal (to the above its recrystallization point) after which it is smashed into a die – depending on the requirements, this die can also be heated. Because the metal is hot, it ‘moves around’ easily and allows manufacturers to create more elaborate shapes than with cold forging.With super alloys (which have low forgeability), processes such as isothermal forging – where deformation takes place within a controlled atmosphere - is used in order to avoid oxidation.Isothermal forging, also know as hot die forging, is a hot working process which entails the workpiece being maintained at its maximum elevated temperature throughout the entire forming process.Maintaining this temperature is done by heating the die – this will be at the temperature of, or slightly lower than the elevated temperature of the workpiece. Forces exerted by this die forms the workpiece and, because the die is also at an elevated temperature, cooling of the workpiece between the mold work interface is eliminated. This in turn results in an improvement of the metal’s (workpiece’s) flow characteristics.Note here that isothermal forging can also be performed in a vacuum.Hot Working DiesThe dies used in hot forging undergo severe thermal cycle and mechanical loading. This, in turn, affects the life of the die, as the die is open to:Gross CrackingPlastic DeformationThermal Fatigue CrackingWear Depending on the type of forging operation used, the material and the size of the part to be formed, to name but a few examples, forging dies are required to have the following properties and characteristics:A sufficient hardness as well as the ability to retain this hardness at elevated temperatures.An sufficient hardenability as well as a resistance to fatigue.A good ductility and toughness in all directions at both elevated and low temperatures.Enhanced levels of both hot hardness and hot tensile strength. The Benefits of Hot ForgingCommonly used for the type of parts that have an influence in technical applications, hot forging is also a recommended process for deformation of metals that feature high formability ratios.The advantages of hot forging includes:An increased ductility.Because of the decrease in yield strength, it takes less energy (or force) to work with the material.During hot forging and subsequent deformation, pores can reduce (in size) or close completely.Because the elevated temperatures increase diffusion it is possible, in turn, to reduce or remove chemical inhomogeneity.In hot forging steel, the weak and ductile FCC (face-centered cubic) austenite is deformed instead of the strong BCC (body-centered cubic) ferrite – which would deform at lower forging temperatures. The Disadvantages of Hot ForgingHot working, as all metal forming processes, also has a set of disadvantages. These disadvantages include:The result of a less precise tolerance caused by warping and thermal contraction. This is caused in instances where uneven cooling is present.There is the possibility that the grain structure may vary throughout the metal.With hot working, there is also the possibility of an undesirable reaction between the metal being forged and the surrounding atmosphere.
Read More>>